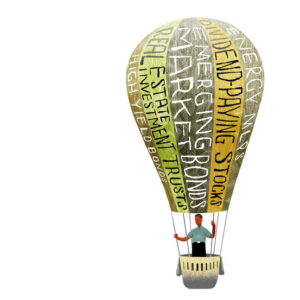 Yield-starved investors can take on too much risk. Here’s a better course.

By MICHAEL A. POLLOCK
Investors are desperate to get more income out of their mutual funds. So desperate, they may be taking on more investment risk than they realize.

Their desperation is easy to understand. Yields of some types of bonds are at their lowest levels ever. But many investors are chasing income by piling into just a few areas, as if those were the only choices left to them. Through October, some $28 billion has flowed into U.S. high-yield bond mutual funds, about twice as much as in all of 2011, according to Morningstar Inc. Other yield-heavy sectors, such as high-dividend equity and emerging-markets bond funds, also have seen strong inflows.

The danger is these high-yield bets increase one’s exposure to risk. Certain maneuvers can reduce the risk, but many individual investors may not be knowledgeable enough to know what to do. “The choices can be overwhelming,” says James Wong, a fund manager at Los Angeles-based Payden & Rygel.

Professionals say there are ways for investors to pursue more income with low risk. You could start by buying a handful of funds with good long-term records and a diverse mix of assets: broad bond and equity funds, for example, that provide decent income and diversification. Another possibility is to own a single, all-in-one fund that invests in both bonds and stocks and tactically shifts to take advantage of changing market conditions.

Here are things to consider for a diversified income-investment strategy:

Soaring demand for fixed-income investments has pushed yields lower for everything from Treasurys and investment-grade corporates to junk bonds. Prices and yields move in opposite directions in bond markets. Most bond professionals believe high-quality bonds are vulnerable to retrenchment as a gradual pickup in economic growth poses the risk of returning inflation.

Bonds from issuers with lower credit ratings, though less sensitive to rate moves, carry their own risks. A big one is volatility. During the 2008 market meltdown, high-yield bond prices fell nearly as much as those of stocks, says James Swanson, chief investment strategist at MFS Investment Management, Boston.

Prices for high-yield bonds have surged about 13% this year, fueled by the intense investor interest in income. With the average high-yield bond trading at about 104, the sector looks pretty pricey, Mr. Swanson says. “Investors aren’t chasing fundamental value anymore in high-yield, and I think that could end in another train wreck,” he cautions.

2. Spread risk in a select group of funds

Protect yourself against a potentially sharp downturn in bonds while preserving income by investing in a select group of focused bond and equity funds. For this to work, you need to understand how certain types of funds can complement one another in various market scenarios.

John Belluardo, a financial planner in Dobbs Ferry, N.Y., doesn’t use a pure bond strategy. He commonly puts client money into at least eight mutual funds, including as many as five different narrow bond funds and several funds that provide some exposure to stocks.

For example, James Balanced Golden Rainbow recently had about half its portfolio in U.S. stocks, while Vanguard Wellesley Incomehad more than a third in U.S. or foreign stocks. Morningstar classifies both of these as “conservative allocation” funds.

Among his favorite bond funds are Vanguard GNMA, Vanguard Intermediate-Term Treasuryand Vanguard Intermediate-Term Bond Index,which together cover a large area of the fixed-income markets. Mr. Belluardo also usesVanguard Short-Term Bond Index, because it would lose less value than the other funds if interest rates shoot up. But, because inflation eats into the value of the income from most bonds, Mr. Belluardo also likes Vanguard Inflation-Protected Securities.

“Strategic income” bond funds invest in many sectors and have considerable flexibility to adjust holdings to reduce risk or take advantage of opportunities. Because they often have a third or more of their portfolios in lower-rated bonds, their prices can fluctuate during periods of volatility—but they usually are less volatile than funds that make more concentrated wagers.

The managers of Fidelity Strategic Income have been adept at repositioning over the past six or so years, according to analysis by Morningstar. They trimmed exposure to high-yield and emerging-markets bonds before those sectors got hit in 2008, then shifted back as valuations became more attractive.

The fund, which ranks in the top sixth of Morningstar’s multisector-bond group over the past five years and yields 3.2%, tries to provide one-stop shopping for bond investors, says manager Joanna Bewick. But shareholders need other, non-bond sources of income and protection from inflation, she says. “We think of income as a comprehensive portfolio strategy, not just a bond strategy,” she says.

Another strong-performing multisector bond offering is Pimco Income, which yields about 4.1% and recently had more than half its portfolio in mortgage securities.

Morningstar’s newer “nontraditional bond” grouping includes some funds that aim to produce returns with minimal volatility. Dreyfus Opportunistic Fixed Income, for one, uses diverse U.S. and foreign positions to limit its sensitivity to U.S. interest-rate moves to about the same level as a traditional short-term bond fund while generating more in yield. Its yield is about 3.1%.

In recent years, the fund industry has introduced more all-in-one strategies, which often are classified by Morningstar as conservative-allocation funds. These funds own bonds, stocks and other securities that generate attractive income, including master limited partnerships, or MLPs, which usually are backed by energy pipelines that generate regular revenue under long-term contracts. The revenue from an MLP is then passed on to investors. The managers of so-called conservative-allocation funds continually adjust exposure to capitalize on developments in various market areas.

BlackRock Multi-Asset Income is a tactical allocation fund that can own any type of asset that generates income anywhere in the world, says Michael Fredericks, who heads the team that manages the fund. The broad-based strategy is aimed at people nearing or in retirement who want current income and have very low risk tolerance, Mr. Fredericks says.

The fund, which yields 4.8%, recently had about 60% of its portfolio in bonds and 30% nearly evenly split between U.S. and foreign stocks. It ranks in the top 6% of its group for the past three years.

The fund has slightly trimmed its exposure to high-yield bonds, but is keeping that allocation at about 40% of the total because the fund’s managers believe that fundamental conditions are still supportive for the sector, says lead manager Michael Schoenhaut. JPMorgan Income Builder ranks in the top 5% of its category for five years.

5. ETFs, too, offer income and diversification

Financial firms offer a dizzying variety of exchange-traded funds that generate attractive yields from both broad and narrow portfolios. A key advantage is that ETFs typically charge much lower management fees than traditional funds, so investors get to keep more of the returns a fund generates.

A fund that was launched this year by State Street Global Advisors offers one of the broadest arrays of assets in a single ETF. SPDR SSgA Income AllocationINKM +0.16% is a fund of funds. It has an actively managed portfolio—its team can shift allocations by adjusting its positions in underlying ETFs held by the fund, says David Mazza, who heads ETF investment strategy at State Street.

Recently, the fund had about 43% in equities and 33% in investment-grade bonds. It also invests in ETFs that buy high-yield bonds and real-estate securities. It yields about 4.7%.

Another ETF that invests in ETFs is iShares Morningstar Multi-Asset Income IYLD +0.23% . The fund, which yields nearly 6.8%, recently had about a fifth of its portfolio in high-yield securities, with the rest in assets ranging from investment-grade bonds and dividend-paying stocks to emerging-markets bonds.